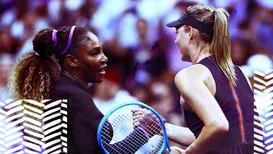 Serena Williams took Architectural Digest on a tour of her newly designed home and it’s a study on subtle flexing.

You know from the jump this video is going to be good when she opens by explaining she replaced a formal living room with an art gallery — because she felt like it. There’s even a plush chair covered in dead Elmos, which I love because it’s hilarious, and also because I know this thing is probably worth hundreds of thousands of dollars, but my pea-sized brain can’t appreciate the art.

The real star of this video is Serena showing off her trophies, because it’s intense. The best part is that Williams can immediately point out her Weaties boxes, but then is like “I don’t keep my Grand Slam trophies here though … oh wait, there’s an Australian Open one, oh and the U.S. Open is over there.”

There’s just something beautiful about having two of the biggest prizes in tennis chilling in a room in your house, but you can’t really remember where they are. This is definitely not a conscious flex, but my God is there some flexing nonetheless. Serena picks up the French Open trophy and says “I clearly don’t have many of these,” in an attempt to be humble, then casually says “I think I only have two or three … three.”

“Now all you need is me to show you a Wimbledon, but I don’t think I have any here … oh wait, I do […] oh, here’s another Wimbledon trophy.” At this point I couldn’t do anything but laugh because the whole thing was so hilarious.