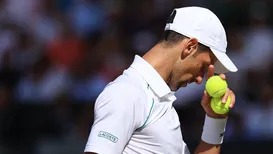 A tennis match in the ITF World Tennis Tour is raising as many questions as eyebrows. Artem Bahmen, a “tennis player” from Ukraine, is being branded as an impostor after video emerged of his 6-0, 6-0 loss to Thailand’s Krittin Koaykul — a match where it was unclear if Bahmen had ever picked up a racket before, let alone played in a professional match.

The match, which is being branded as the “worst of all time” was a rare Golden Match for Koaykul, who won without dropping a single point. A feat that sounds impressive until you watch the video and realize his opponent struggled to even get the ball over the net.

Attempts to learn more about Bahmen have come up empty. There is no evidence he has ever played in a professional tournament before, and even the Ukrainian Tennis Federation has no ranking points or history of Bahmen playing in a match.

So how does an obviously ill-equipped player manage to enter a $15,000 tournament in Doha? Necessity. Bahmen was entered as a wild card, which only requires a player to sign up and pay an entry fee. Tennis.com explained that in low-level tournament like this one sometimes it’s difficult to make up a full draw, so organizers are incentivized to let in wild card competitors to fill out the draw, and also raise more money.

Typically this isn’t an issue, because there are more than enough prospective tennis players to make up a draw with wild cards, but in this instance a terrible player found his way onto the court before proceeding to lose 48 straight points en route to one of the world matches of all time.

Bahmen’s display was so bad it’s prompting some to call for a reexamination of how tournaments allow in wild card competitors. Personally, I am all for these random, Pros vs. Joes style matches happening once in a blue moon. It’s dumb, it’s fun — and I’m a fan of dumb and fun.